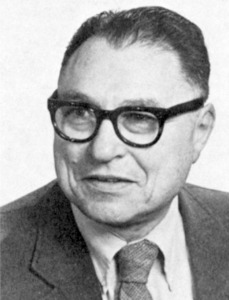 Norman Cazden (1914-1980) was an American composer whose prime creative years were obscured by McCarthy-era political pressures. A graduate of Julliard Conservatory and Harvard University (PhD); a student of Aaron Copland, Walter Piston, and Charles Seeger; a colleague of Mark Blitzstein, Earl Robinson, Sandy Ives, and Herbert Haufrecht, he was shy by nature and uncompromising in principle.  Bio

Cazden’s compositions are largely out of print, but can be accessed through the libraries shown below.

Only two of Cazden’s pieces are available on commercial recordings: the Piano Sonata Opus 53 #3 (Robert Helps, New Music for the Piano); and Three Ballads From the Catskills (Oslo Philharmonic Orchestra). The clips provided on this site are mainly from campus performances at the University of Maine, Orono, where Cazden taught in his final years.

“Norman was a man of many gifts and unusual achievements. His quiet and modest ways left many of his colleagues unaware of the quantity and diversity of his creative output. He was before all, an eminent composer of national reputation. In addition, he was an outstanding pianist and a musicologist whose significant contributions to the fields of psychoacoustics, aesthetics, music theory, and American folksong scholarship are yet to be fully recognized.”

Thank you for visiting. Please enjoy and share this music!

Scores and some parts are available through one or more of the following collections. Click on each name and search “Norman Cazden”: URSUS; University of Illinois; Oberlin College; Eastman School of Music; Harvard University; New York Public Library.

The administrators of this website do not own copies and cannot respond to requests for specific manuscripts. Please ask a local music librarian for help.